Why Is This So Significant?

After Understand the Times uncovered David Barton’s agenda in a News Alert posted May 12, 2011, some contacted us and asked the question: why would David Barton attempt to convince Calvary Chapel church audiences that America’s Founding Fathers were Christians by appearing to manipulate the words of the Founding Father documents? What would be the motive behind him doing this?

Some also asked, could the motive be for money, notoriety, popularity, making people look foolish, or something else? You would think that Barton would have realized that someone would eventually realize that the words of the documents he was using were manipulated and that he would eventually get caught. Or maybe Barton really believed he could get away with this manipulation. Or, maybe his reasoning was based on something completely different. Was it possible that he was developing a sinister method for deception that worked by appealing to the sinful heart of man?  As Jeremiah 17:9 states: “The heart is deceitful above all things, and desperately wicked: who can know it?”

Satan knows scripture and he realizes that the heart of man is deceitful and desperately wicked. He also knows that sinful flesh can be tempted to be prideful. If Satan can get a believer, a church or a denomination into a state of pride, Satan knows he job is much easier. When man is deceived he can be easily manipulated. Satan is a master manipulator. This is how the deception plan works in the Last Days.

Obadiah 1:3 states: “The pride of thine heart hath deceived thee….” We need to watch out for pride as the Bible teaches. But few who have a problem with pride recognize they have problem with pride. When followers of Christ think of temptation they usually think of sex, pornography, alcohol, food, lusts of various sorts, but never pride. Pride is the sin hardest to discern by those who are prideful.

Therefore, it is apparent that one of the “key” ingredients of being deceived is pride. Pride is the foundation of all sin because pride blinds one from believing there is no need to heed God’s word. Pride comes before a fall as stated in Proverbs 16:18. Pride gives one the feeling he or she does not need to fear God or tremble at His word. Pride gives us the attitude that “grace covers all sin” versus accepting that we receive grace so that we can be obedient to God’s word and limit sin (Romans 1:5). Pride gives us the imagination than we can be powerful. Pride makes man big and God small. Power is addicting for fallen man. Even pastors and church leaders can be addicted to pride and power.

Satan fell through pride.  Adam and Eve fell through pride by not needing to heed God’s one command of not eating from the tree. So pride is a real problem, isn’t it? Especially when the Lord commands all in James 4:10: “Humble yourselves in the sight of the Lord, and he shall lift you up.” “ What is meant by “in the sight of the Lord”? It means the Lord is omnipresent. We should humble ourselves everywhere, all the time.

If your goal were to deceive a nation, what would you do? What if certain diabolic people realize they can deceive others by appealing to their pride and their sinful flesh? How far could they go to develop a plan to deceive?  Hitler did that, when he was able to manipulate Germany in to a sense of national pride and hunger for power. Hitler knew what he was doing. Hitler was in the occult. He was inspired by doctrines of demons.

In America, pride in America is looked on as a good thing. The American culture is built on pride with songs and slogans. In this commentary we will be looking at the Christian Nation and the Patriot Religion Heresy. We will examine this topic over the next several months by breaking down one of maybe Satan’s most brilliant deceptions in the history of mankind but particularly America.

Pride in the Last Days

We know from scripture that the Laodicean church Jesus described was a church filled with pride. In Revelation 3:17 we read:  “Because thou sayest, I am rich, and increased with goods, and have need of nothing; and knowest not that thou art wretched, and miserable, and poor, and blind, and naked.” The Laodicean church “thinks” they need nothing: which is pride.

Jesus also said they were lukewarm, in one case reading and studying the Bible and the other case loving the American Dream pursuit. God Bless America, right?

We know that Satan will bring about a “one world system” that will also have a “one world religion in the Last Days. This One World Religion is known as the “666” plan. Satan knows Christians who are under the spell of deception through pride will have to be tricked into accepting this plan. They won’t buy into a blatant lie so Satan uses many tools to deceive them. Effective deception occurs when the deceived do not realize they are being deceived.

Remember, the Bible states in Genesis 3:1 – “Now the serpent was more subtle than any beast of the field which the LORD God had made…” A quick reminder of who Satan is and where we Christians live is helpful:

Satan is using many tools in order to accomplish his ultimate goal of being worshiped as God. Satan has set up many ideas, groups and organizations inside and outside America as tools towards his goal.

Ecumenism Is A Sin

The Christian Nation Heresy is one of the most powerful tools to implement ecumenism.  It has been born in the U.S.A. and has been set in place by men with motives. These men are the Jesuits who have infiltrated many organizations that once stood for biblical truth. The Jesuit plan is to make the pope’s word the word of a god and the Word of God the word of man.

The Christian Nation Heresy, it will be shown, was founded by the Jesuits who have a plan to put the USA under the leadership of the pope and his kingdom. For many who profess to be Christian, they have been sucked into this deception without knowing it. Others are sucked into it and know it.

The dove is a common symbol found associated with the Jesuits all over the world. Some have called the Jesuits the “dove club.” They have a common goal to bring the separated brethren back to the mother of all churches, which, of course, is located in Rome.

It was the Roman Catholic, Lord Baltimore, and the Jesuit, Charles Carroll who were behind “Freedom of Religion” in the USA. The Roman Catholic mass with pagan worship of the worship of Mary as well as other pagan practices were originally banned in early America by the Protestant Pilgrims and Puritans. The Jesuit plan was to put an end to this. It is the Jesuits who wanted freedom of religion so their Babylonian style of worship would be tolerated. This was the beginning of Satan’s ecumenism in America.

We see from David Barton’s own statement on the Jon Stewart Show that he (David Barton) is OK with the Islamic Sharia Law:

Why would he do this? He is the one who has been going around speaking at various Calvary Chapels (also Charles Stanley’s church) promoting Christianity. Islam is an enemy of Bible-believing Christianity. You see, you just cannot have it both ways. There is something that is not quite right about this picture, don’t you think?

We also see below David Barton joining the Mormon, Glenn Beck on a trip to Israel:

Beck also seems to be a friend of the Vatican. Read this quote from Beck and then listen to his own words:

This is a quote from Beck:

" We are entering a…we are entering a dark, dark period of man. Um, I was, um, I was in the Vatican, and I was surprised that the individual I was speaking to knew who I was. And they said: ‘Of course we know who you are. What you’re doing is wildly important. We’re entering a period of great darkness, and if good people don’t stand up, we could enter a period unlike we have seen in a very long time.’ It was odd to stand in the Vatican and hear those words. Of all places that would understand the Dark Ages."

Also note this photo of Beck wearing his Masonic sweater: 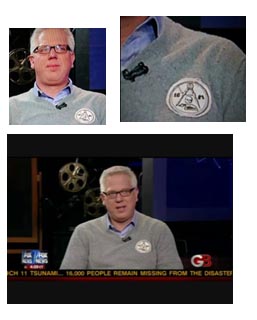 We can also see that David Barton is part of the “Black Robe Regiment” which is hyper ecumenical:

We see the flared ends, the circle, and the swords. The professed Mormon, Glenn Beck, and David Barton both belong to the “Black Robe Regiment”.

Investigative journalist and Fox News consultant, Wayne Madsen has done an important documentary. It is titled “The Christian Mafia,” and is a must read. It is located at http://www.insider-magazine.com/christianmafia.htm

Wayne Madsen lists David Barton as being a part of a “cult-like” group in the Washington DC area. This expose has gone undisputed since it was written a few years ago. The term “Christian Mafia” is a name this group calls themselves. This group is also called “The Fellowship”, “C Street”, ”K Street”, “The Cedars”, and “The Family”.

According to Wayne Madsen, “The Fellowship” goes all the way back to the 1930’s with “pro-Nazi” style, Abraham Vereide.

A quote from Madsen’s expose on “The Fellowship” states the following:

“Such global ecumenicalism is a founding principle for today’s Fellowship. With total devotion to Jesus and not necessarily His principles at its core, the Fellowship continues to reach out to Moslems (including Saudi extreme Wahhabi sect members), Buddhists, and Hindus.

The Thousand Year Rule and Reign

Its purpose has little to do with religion but everything to do with political and economic influence peddling and the reconstruction of the world in preparation for a thousand year Christian global dominion. Post-millennialism Fellowship members believe that Jesus will not return until there is a 1000-year pure Christian government established on Earth.

It is this mindset that has infused the foreign policy of George W. Bush and his administration. The desire for a thousand year political dominion of the world is not new. Hitler planned for a “Thousand Year Reich” over the planet. It is not a coincidence that Hitler desired this so-called Christian dominionist reconstructionist idea to set up a thousand year rule and reign here on planet earth.

These Christian dominionists are the political heirs of Hitler, the Norwegians Vereide and Quisling, Buchman, Opus Dei founder and fascist patron saint Josemaria Escriva and their political and religious cohorts.”

The pro-Nazi Christian Dominionism goes back to the Vatican. In 1493, Pope Alexander VI established Christian dominion over the New World. He issued a Papal Bull called "Inter Caetera". This Papal Bull has never been revoked.

The Roman Catholic religion with all its Mary worship, Fatima Peace Plan, praying to dead people and other occult practices is slowly and subtly working itself in to churches through many forms of ecumenism. Of course the Emerging Church is a just another road to Rome. Some have already have been drawn in and some are in the process of being draw in. This is why Understand The Times has been warning the church and particularly Calvary Chapel for over a decade.

Time will tell, won’t it?

Jesus said to examine the fruit.

Ephesians 5:9 – “For the fruit of the Spirit is in all goodness and righteousness and truth.”

Now, to answer the question: What is the significance of the David Barton-Calvary Chapel connection? You should be able to decide: we never spoon-feed those who read our commentaries.